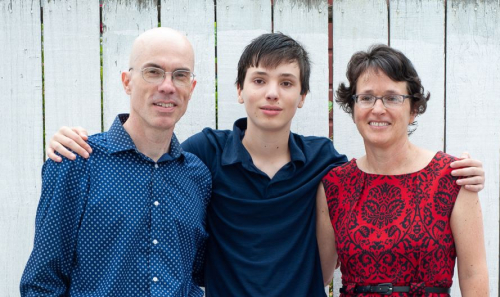 Francisco and Merav, our guest linguists of the month, live in San Francisco. I have known them for many years and seen at first hand their skills as professional translators (Spanish-Hebrew-English), as well as the trilingual skills of their son Adriel. I had one such opportunity when Francisco and I attended an interpreting conference in Los Angeles, and on our way to and from it on the underground railway, we discussed the anglicized Spanish directions emanating from the loudspeaker system. (Plataforma instead of andén).

As explained in the interview, the influence of Spanish on the couple was strong, despite the fact that Francisco was born in the USA and Merav in Israel. Having chosen careers in languages, they made a point of ensuring that their son would be trilingual, with his father speaking to him in Spanish and his mother in Hebrew. Adriel, now 13 years old, is schooled in English and Spanish.

Q: What family influences did you have on your interest in languages?

A: While neither of my parents is a linguist, my parents grew up in the Jewish community of Buenos Aires, and as kids were fluent in Yiddish in addition to Spanish, and later Hebrew, too. One of my mom's cousins and her husband (both now deceased) ended up in Los Angeles in the seventies, and both worked as court interpreters (Spanish and German into English).

Q: How did you acquire a command of spoken Spanish and English while growing up in Israel?

A: I grew up in Israel, in a small, tight community (a Kibbutz) of immigrants from Argentina. The adults never spoke Spanish to us, kids, - it was against the norms and the ideology of the time - but spoke it among themselves. When I was four, my beloved granny came to visit from Argentina and stayed with us for a few months. She could only speak Spanish to me, and to everyone's wonder, I replied to her and soon became fluent. I started taking English, like all Israeli school kids, in 3rd grade and had always loved it and was good at it.

Q: How did you use your basic knowledge of Spanish and English in your academic studies?

A: I earned my BA in English and Spanish Literature from the Hebrew University in Jerusalem, thus perfecting my command of both languages further. In fact, that was the first time I studied Spanish in a classroom setting. I studied at the Universidad Complutense in Madrid, Spain, for a year, and upon my return to Israel decided that I wanted to become a translator. The Translators and Interpreters School at the Bar Ilan University decided not to open a Spanish-Hebrew program that year, so I was given a special opportunity to join the English-Hebrew program. I graduated three years later with a translation/interpretation certificate summa cum laude from both programs, as well as a Masters in English Literature.

Q: How were you able to maintain your command of Hebrew for professional purposes?

A: I was trained as a Hebrew-as-a-second-language teacher, thinking it could land me a nice summer job. Almost thirty years later, I still teach it. I still consider Hebrew my first language: I read mostly in Hebrew, translate only into Hebrew, and try to immerse myself in all Hebrew media.

Q: As a contract interpreter and translator for the US State Department, you have translated and/or interpreted for more than one high government official. I interpreted President Obama three times, I believe: the speech that he gave in Jerusalem in front of students during his visit in 2013; at the White House when he had President Abbas, President Mubarak, King Abdullah and P.M. Netanyahu for dinner in 2010; and at the State Department in 2011.

A: I was on the translation team of Obama's Cairo speech in 2009, and Trump's Riyadh and Jerusalem speeches in 2017. I also interpreted at the Annapolis Peace Conference in 2007 and at some high-profile federal court hearings in the year following the Patriot Act.

Q: Do you have a problem translating for President Trump, despite your personal opinion of him?

A: When it comes to my principles, I would feel better translating for a president that did not offend about half of the American people. But when I work, this should not be reflected in anything that I do.

Q: How did you acquire your high skills as a Spanish-English translator and interpreter, having been born in the USA?

A: My father, Lloyd Kermit Hulse, was born in rural Oregon during the depression, to anglophone parents. At age 12 he started to teach himself Spanish from books. The history of the conquistadores was the draw. He studied Spanish in high school, then at Mexico City College. After his first marriage to a Mexican American, his fluency scored him a job as the Latin-American sales representative for a California company. During those travels he met my mother, a native of El Salvador.

Despite having landowning- and thus (nominally) aristocratic parents, the early death of her father forced her mother to work outside the home (as a seamstress), something foreign to a woman of her (former) social station. Thus, my mother didn’t finish secondary school, going to work in her mid-teens as a secretary and personal assistant at a local newspaper to help support the family. When she met my father at age 23, her immersion in local journalism had whetted her appetite for the world of letters, albeit without much study in English.

The couple soon moved to La Grande, Oregon, where my mother quickly acquired English while my father taught Spanish in the local high school. He then became an associate professor at Lewis & Clark College. A masters and a doctorate from the University of Cincinnati followed. The newly-minted Doctor moved his family back to Portland and continued teaching at Lewis & Clark as a tenured full professor, until retirement.

He led several exchange programs to Latin America, family in tow. During the 1977-1978 school year, he taught Spanish at the University of Heidelberg in Germany. That year I quickly learned German, then forgot it even more quickly upon our return.

Save for these few years abroad, I was raised almost exclusively in the U.S. With no Spanish-speaking classmates in elementary and a handful in high school, the island of Spanish immersion at home was almost all of my exposure. My parents always spoke Spanish to us whenever courtesy didn’t require switching to English for English-speakers to be included.

Q: What was your own study path?

A: I studied mathematics at Lewis & Clark. I tested out of the foreign-language requirement, placing into 3rd-year French (thanks to 3 years of study of the language in high school, where I was generally the star pupil, plus a month-long homestay in France immediately before the test). I used the resulting available credit-hours to take music and art classes.

A year of poorly paid “McJobs” after college did not quell the growing desire to study music. So off I went to Mills College in Oakland for a masters, where I ran up the exorbitant debt I’d avoided as an undergrad (by the simple accident of birth: being a faculty brat). With my coursework complete and my concert given, all that was left to do to finish the graduate degree was write my thesis (about my concert compositions), but meningitis sidelined me before I could even begin it.

Now it was time to get a job. I spent a year as a substitute teacher, another as a teacher of math and science at a continuation school, and a third as a math teacher at a middle school. This last one was the turning point, for three reasons: I realized that staying in the teaching profession would make me a curmudgeon long before my time; during that year, I taught half of my classes in Spanish; I served as an impromptu interpreter for other teachers at their meetings with parents of our students.

In the autumn of that year (1995), as I contemplated a new career, the experiences garnered from my last year of teaching gave me the confidence to volunteer as an interpreter at San Francisco General Hospital.

I immediately put the volunteering on my résumé and sent that rather thin C.V. to every interpreting-&- translation agency in the Yellow Pages. The bottom feeders among them scooped me right up. Ever the autodidact, I improved and moved progressively up the ladder, landing better clients and joining the rosters of tonier agencies. Finally, in late 2010, largely at the insistence of my wife, I knuckled down and studied seriously for the court-interpreting exam. I passed it in early 2011.

This story would not be complete without mentioning my great friend Omar, who is my wife’s second cousin, and the one who introduced us. I met this friendly Argentinean in 1993. His unwavering friendship through hours, days, weeks, months and years of dialogue, discussion, disagreements, and didactic debate, coupled with his generosity in correcting my piss-poor spelling in Spanish as I wrote practice essays for the CBEST (an entrance exam for teachers) rounded the rough edges off my virtual illiteracy in Spanish.

Q: From the day Adriel was born, Merav has spoken to him in Hebrew, and you have spoken to him in Spanish, while he has absorbed most of his English from the outside world. What other efforts have been made to make him truly trilingual?

A: Witnessing the transferability of literacy from one language to another is one of the many joys I’ve had as a parent. He’s 13 and has yet to stage the common rebellion of answering back in English. He’s proud of being trilingual. So far, so good. He’s had Spanish-speaking classmates since preschool, and he attends a K-8 dual-immersion bilingual school.

Meanwhile, my French has rusted solid, and my Hebrew advances more slowly than the peace process with the Palestinians. Still, I managed to outdo my old man in one respect: my kid is trilingual, and tri-literate.

Q: Having lived in a trilingual family, and having had to speak with your parents in two foreign languages, and with your schoolmates and friends in English, is this something you would recommend to other multilingual parents for the benefit of their children?

A: I think I would recommend to multilingual parents that they teach their children multiple languages. Even though it can be hard for kids to remain proficient in the various languages they’re expected to know, it will help them in the long term develop language skills and be able to learn faster. Or for example, if the parents are traveling to their home country with their child, not only would the child be able to communicate fluently with the locals, but they could also practice their speaking skills in the language that is spoken there (assuming they have been taught that language). I myself have been mistaken for an Israeli kid when on vacation in Israel because I can speak Hebrew like a native speaker, which I owe to my mom teaching me the language at a young age.

Trumps’s Hebrew Translator says she was happier working for Obama