Our interviewee this month is Christina Khoury, resident of the city of Haifa, Israel.

The interview resulted from a stay by your faithful blogger at the Beit Shalom (House of Peace) Hotel, where Christina works. The undersigned overheard Christina conducting three consecutive conversations in Hebrew, Arabic and English.

The interview is preceded by a short overview of Haifa and its history.

Built on the slopes of Mount Carmel, Haifa has a history spanning more than 3,000 years. The earliest known settlement in the vicinity was a small port city established in the Late Bronze Age (14th century BCE).

Haifa and Marseille are twin cities

Over the millennia, the Haifa area has been conquered and ruled by the Canaanites, Israelites, Phoenicians, Persians, Hasmoneans, Romans, Byzantines, Arabs, Crusaders, Ottomans [1] and the British, and since 1948 it is part of the State of Israel, in which it is the third largest city.

In 1100 or 1101 Haifa was besieged and blockaded by European Christians shortly after the end of the First Crusade and then conquered after a fierce battle with its Jewish inhabitants. Under the Crusaders, Haifa was reduced to a small fortified coastal stronghold. The army of Saladin [*] (founder of a Sunni dynasty of Kurdish origins) captured Haifa in 1187 and the city's Crusader fortress was destroyed. The Crusaders under Richard the Lionheart retook Haifa in 1191.

In 1799, Napoleon Bonaparte conquered Haifa during his campaign to conquer Palestine and Syria but he was forced to withdraw. In the campaign's final proclamation, Napoleon declared that he razed the fortifications of "Kaïffa" (as the name was spelled at the time) [2] along with those of Gaza, Jaffa and Acre.

Haifa was captured from the Ottomans in September 1918 by Indian horsemen of the British Army armed with spears and swords. It became part of the British Mandate of Palestine until 1948, when the State of Israel was founded.

The population of Haifa is heterogeneous. Israeli Jews comprise some 82% of the population, almost 14% are Christians, the majority of whom are Arab Christians and some 4% are Muslims. Haifa also includes Druze communities

[*] Salah ad-Din (or Salahu’d-Din or Ṣalāḥ ud-Dīn) was the first sultan of Egypt and Syria and the founder of the Ayyubid dynasty.

Jonathan Goldberg: You come from a family with an interesting, cosmopolitan history. Tell our readers about that.

Christina Khoury: My paternal Grandfather was born in Torino, Italy and later moved to Genova where he got married and where my father was born and raised. My maternal grandfather had an Italian mother and Montenegrin father and was born in Constantinople in 1897. He met my grandmother in Constantinople, where she was also born. Italian was their mother tongue since they each had Italian mothers, although they were living outside of Italy.

In 1910 my maternal grandfather came from Constantinople to Haifa at the age of 13 with other members of his family to work on the Hejaz railway [3], first in Aleppo and Damascus and later in Haifa. With the outbreak of the First World War in 1914, construction of the Hejaz railway was halted. My grandfather remained in Haifa where he founded a factory. In 1925 he married my grandmother in Constantinople, the city of their birth. There, first my uncle (1927) and then my mother (1928) were born. In 1934 the family moved to Haifa when my mother was almost 5 years old. In Haifa, two more daughters were born (my aunts).

The family settled in Haifa and my mother and her siblings were educated in the local Christian Schools. They grew up in Haifa and spoke Italian.

During WW2, the family, being Italians and not part of the Allies in the area, were kept by the British as prisoners of war in different imprisonment Camps in what was Palestine under the British Mandate at the time, until 1948, when the State of Israel was established..

In 1948 my parents met in Haifa when my father, who was born in Genova, was on a short-term mission for the Italian consulate. They were married in Haifa in 1949 and my mother went to Italy for the first time as a young bride.

My parents settled in Genova, my father's birth town, and later moved to different parts of northern Italy. I was born in Genova but also lived in other regions of Italy before moving to Israel in 1984, at the age of 15.

J.G.: Tell us about the different languages that you speak:

C.K.: After moving to Israel from Italy I had to learn Hebrew and then continued my schooling in Hebrew, in Haifa. I had started English in middle school in Italy, but broadened my knowledge of this language here in Israel where I was able to practice it more and more. French is a language to which I was exposed already at a young age, since there are some members of the enlarged family who are French speakers, besides studying it in school. I picked up Arabic from hearing it here in Haifa from the Christian Arabs I became acquainted to. I learned German through my work, since the Hotel where I work belongs to a Swiss Organization, we get many German speaking guests. I took a course of German at the Haifa University and then practiced at work. My mother spoke 5 languages herself, so I must have inherited from her the love for languages.

J.G.: Of what religious faith are you and your husband.

C.K.: I was raised in a devout Catholic home but at an early age I chose Messianic Christianity, which is similar to the Evangelical Church.

My husband comes from a Lebanese Maronite Christian family. He was born in London to a British mother and a Christian Arab father, but came to Haifa as a baby. He grew up in Haifa and attended the Messianic Christian Community.

J.G.: In what languages do you speak to members of your family?

C.K.: I speak to my husband mostly in Hebrew, which was the language we were both schooled in here and is the main spoken language in Israel. I spoke to my late mother in Italian and I have continued that tradition by speaking to my daughter (who was born and grew up in Haifa) in Italian, and we both speak to my grandchildren in Italian. In that way five generations of my family on the female side have maintained their command of Italian (my grandmother in Constantinople, my mother in Italy, myself, my daughter and my grandchildren in Israel). At home, with my husband, our daughter and two younger sons and our son in-law, we alternate between Italian and Hebrew.

J.G.: How have you managed to keep a record of your family history?

C.K.: My mother memorialized her life in about 100 pages in Italian. I plan to translate them into English.

J.G.: What is Beit Shalom? What is your association with it?

C.K.: The Beit Shalom Hotel in Haifa belongs to a Swiss Evangelical (Protestant) organization. It was built in the 1970s. As a member of that Community in Haifa, I heard about a vacancy at the hotel 30 years ago, and I have been working there ever since.

J.G.: What kinds of guests visit the hotel?

C.K.: The Swiss organization arranges guided tour groups to visit the Holy Land, including a stay of several days in Haifa, with accommodation at the Hotel. In addition, members of the Baha’i religion, whose world center is in Haifa, find the location convenient because it is close to the magnificent Bahai terraces that occupy a large tract of Haifa. [4],[5] Guests and tourists both from Israel and abroad, enjoy our hospitality.

J.G.: Haifa has several Christian communities. Can you describe them?

C.K.: in addition to our own messianic community, there are Latin Catholics, Greek Catholics and Greek Orthodox. The Catholics in particular enjoy close relations, and to a lesser extent there are contacts between them and the other Christians.

J.G.: What is the degree of ethnic and religious harmony between the Jews, Christians and Muslims of Haifa?

C.K.: It is a wonderful example of peaceful co-existence. It is manifested in everyday life: commerce, entertainment and mixed neighborhoods. Some cultural institutions aim to further encourage co-existence through intercultural meetings and activities.

J.G.: Generally, do Christians as a minority in Israel feel unsafe as they sometimes do in other parts of the Middle East.

C.K.: As far as we know and experience firsthand, Christians have full freedom and live a peaceful life in Israel, especially compared to what we hear about Christians living in the surrounding Arab Countries.

J.G.: There are different theories about the origin of the name Haifa. What do you know?

C.K.: No one is  sure about the origins of the name "Haifa", but it could derive from the name of Kepha (rock – the name of Saint Peter in Aramaic), or it could also be the combination of the words "Hof-Yafe" חוף יפה which means "nice beach", or "Chipa" חיפה  which means "covered" because of Mt. Carmel which covers over the area…

J.G.: You work at the hotel during the mornings and some of the evenings. What do you do in your spare time?

C.K.: I look after my grandchildren and help young students with their English studies.

[1] Refers to the successors of Osman, founder of a dynasty that ruled the Turkish empire until its dismemberment after the First World War and the advent of the Turkish Republic in 1923.

In French, before the adoption of the current spelling (Haifa), the city was known as Caïffe, Kaïffa, Caïfa, even Caïffa. It is this spelling that we find in the first version of Tintin in the land of black gold by Hergé, which appeared in serial in the Journal de Tintin. On the other hand, in the album, released in 1950, mention is made of Haifa (p.14). When the album was redesigned in 1971, Haifa gave way to the imaginary locality of Khemkhâh, just to get everyone to agree!

[3] Narrow gauge railway line, built between 1900 and 1908, to link Damascus to Medina (1,800 km). Ordered by Sultan Abdul Hamid II and carried out with German technical support, the project was intended to facilitate the pilgrimage to Mecca, promote trade and assert the Ottoman presence in the Arabian Peninsula. The Second World war of 1914-1918 sounded the death knell for the Hedjaz railway. Today, there are only a few segments left, in Syria and Jordan.

[4] Baha’ism, also known as the Bahá'í Faith, is an Abrahamic and monotheistic religion that proclaims the spiritual unity of humanity. Members of this international religious community describe themselves as adherents of an "independent world religion". The Bahá'ís, disciples of Bahāʾ-Allāh, are organized around more than 100,000 centers, listed by the World Center in Haifa, around the world. 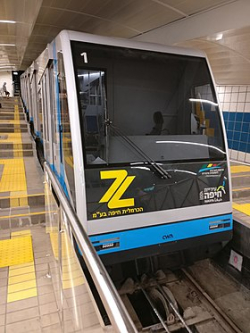 [5]  The hotel is close to the underground metro, the "Carmelit", which was constructed by a French company and inaugurated in 1959 by David Ben Gurion, Israel's first Prime Minister. With only four carriages, six stations and one single tunnel-line of 1800 meters in length, the Carmelit is one of the smallest metro infrastructures in the world.