This column has been expanded in scope to include all linguists, not just translators. This allows us to interview socio-linguists, juridical terminologists, etc. But no-one we ever interview is likely to have as unconventional an occupation as our current interviewee, Jacqueline Suskin, a "performance poet", who has chosen this niche field within the world of poetry.

Jonathan G. interviewed Jacqueline at Echo Park Lake, an island of tranquility in the bustling city of Los Angeles. Jacqueline appeared for the interview, very elegantly dressed and carrying the tools of her profession - a tiny Hermes Rocket typewriter and small loose-leaf note-pad. 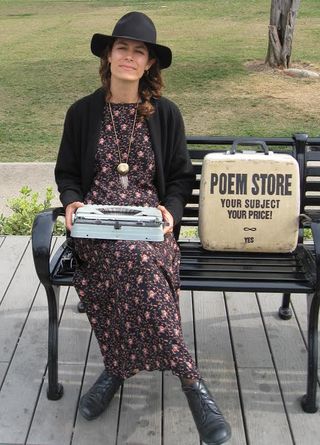 At the end of the interview, conducted while sitting on a bench overlooking the lake, we asked her to write a poem on the subject of French. Her text was as follows:

Taken from the tone of old world
the feeling is in truth
a place and all that land can gather.

So much that time and lineage
show us what it is to be from
some magic center of culture
that continues to speak with hints
of history, romantic and fully
formed by those who keep such
rhythmic language alive.

In addition to the quality and depth of her poems, one astonishing aspect of her work is her ability to begin typing her poem the moment she hears the subject given to her. Immediately we told her our chosen theme, she instantly began banging out the poem and completed it within about 2 minutes. 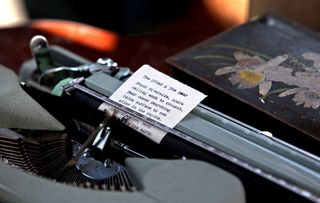 JG: The name Jacqueline is very French. Do you come from a French family?

JS: I am third-generation American but I have French ancestors on both my parents' sides.


JG: When did you first take up poetry and what influenced you to follow that direction?

JS: I still have notes that I made when I first learnt to write at kindergarten. They are cryptic and largely unintelligible, but they reveal a definite desire on my part to express myself in writing. In 7th grade I was allocated part of a literary project and I ended up
writing a complete book. Later my father, a very literate person, read literature to me and installed in me a love of words and an appreciation of their power. At university I studied anthropology with the focus on linguistic history. I also took creative writing courses, mostly in poetry.

JG: The highlight of your working week takes place at the Hollywood Farmers Market, where you sit and receive poetry orders from passers-by. "The lady with the typewriter",  a fixed feature of the Market, sits amidst the fruit and vegetable vendors, the musicians and other participants. What made you choose that unusual work location? 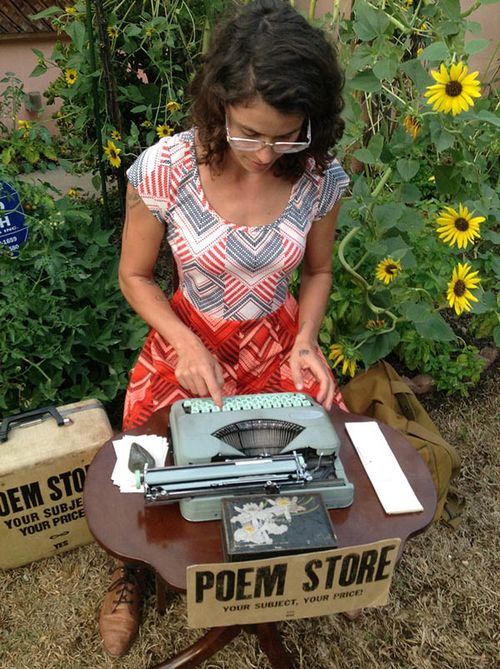 JS : I love the vibrancy and diversity of the Market. The click-clack of my typewriter keys attracts the attention of passers-by. My typewriter serves as my mouthpiece. Some people are fascinated by this antiquated tool. Some younger people have never seen a typewriter.

JG: You could have chosen a laptop computer, to store all the poems you write for future reference.

JS: Each poem I write comes from deep within me, but once it is typed out, I have no need to remember it.  Each poem is unique, even those written on the same subject.


JG: Explain the process of writing each poem, from beginning to end.

JS: People approach me. Whether I chat with them for a few minutes before they indicate the title or topic of the poem they want, or whether the request is made with hardly any prior communication, I immediately get a sense of the person's feelings, and I write a poem that is designed to strike a chord with that person. The words pour out of me spontaneously until the poem is complete. I read out the finished poem and then hand them the typed version. I don't charge for the poem. The recipients pays me whatever they like.

JG: Does your mind ever go blank? Are you sometimes lost for something to write? Do you ever hesitate?


JG: Many people have never read poetry. Most people would say it is far removed from their fields of interest and occupation. How do you bridge that gap?

JS: in the age of e-mails, all of us are poets, even if we don't realize it. I can impart to people the idea of the potency of words, particularly their power to express emotions.

JG: Do you ever feel a lack of appreciation from the person who has commissioned your work.

JS: Never. The contrary is true. People often weep when they realize how deeply the poem has touched them. That is the true role of any poet, to find the depth and import of every subject.


JG: So how would you describe the service you provide?

JS: I see myself as a muse, with the  responsibility of a  poet to reach out to as many people as possible. I feel I have something to offer. I have been called a seer, a therapist, a mystic and an empath.  I am pleased if I can have a therapeutic effect on people who are suffering in some way. But when I begin to write, my own personality is sublimated and the entire focus of my efforts is the emotional situation of the person for whom I am writing. My goal is to help them identify their problems, desires, fears or whatever.

JG: You have been quoted in the Los Angeles Times as saying:

"This is the most physically draining thing I've ever done in my life. When I've written poems for four hours for people I don't know, I'm like a zombie. My brain is mush."

JS: You are an interpreter and you know how exhausting it is to focus on every word being spoken in order to render it's true meaning. For me, the person's emotions are my "source language" and I have to strain every fiber  to turn them into words. It is a draining process.

JG:  So what is the up side if your work?

JS : It gives me a unique perspective of human nature,  the state of humanity. We all share the same kinds of problems deep down.


JG: How do you see your professional future?

JS: I have completed my second book and am looking for a publisher. I hope to write many more. I have been writing poems professionally for 5 years, but I feel I am at the beginning of my career.