The Albertine Prize is awarded each year in New York for the best English-language translation of a work of fiction written in French. The winners of the Prize for 2019 are Negar Djavadi, the author of Désorientale,  and the translator, Tina Kover.  Tina's translation, Disoriental,  was published by Europa Editions (May 1, 2018).

Négar Djavadi was born in Iran in 1969 to a family of intellectuals opposed to the regimes of the Shah, then to that of Khomeini. She arrived in France at the age of eleven, having crossed the mountains of Kurdistan on horseback with her mother and sister. Djavadi is a screenwriter and lives in Paris. 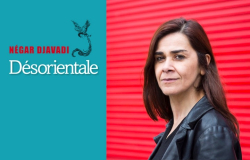 The Prize was awarded on June 5, 2019, at a ceremony at the Albertine Bookstore, in the presence of the author and the translator, as well as Lydia Davis and the French TV presenter and literary critic, François Busnel. 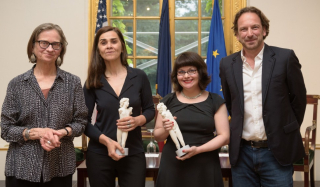 To watch the discussion (1 hour 18 minutes) that followed the ceremony, see https://bit.ly/32AYHNq.

The name of the Albertine Prize and of the bookstore of that name where it is awarded every year, is located on Fifth Avenue, New York, in a building belonging to the French Government in which the Cultural Services of the Embassy of France are housed. It is also the name of one of the characters in Marcel Proust’s “In Search of Lost Time (À la recherche du temps perdu), Albertine Simonet, the lover of the narrator Marcel. Albertine appears in several of the seven volumes of Proust’s work, such as In the Shadow of Young Girls in Flower (À l'ombre des jeunes filles en fleurs), Sodom and Gomorrah (Sodome et Gomorrhe) and The Prisoner (La Prisonnière).

Tina Kover has been a literary translator for nearly twenty years, translating works of both classic and modern literature including Alexandre Dumas’s Georges, the Goncourt brothers’ Manette Salomon, and Anna Gavalda's Life, Only Better. She studied French at the University of Denver and the University of Lausanne, Switzerland, and later worked in Prague teaching English as a foreign language. She currently lives and works in the northeast of England. Her translation of Négar Djavadi’s Disoriental was a finalist for the National Book Award for Translated Literature in 2018 and the PEN Translation Prize in 2019, before recently winning the Albertine Prize.

J.T. Mahanay is a translator of French literature. He received his Master of Fine Arts in creative writing from the University of Arkansas in 2018. In 2015, he translated Antoine Volodine's Post-Exoticism in Ten Lessons, Lesson Eleven. His translation of Bardo or not Bardo, also by Volodine, was awarded the debut Albertine Prize in 2017. 2020 will see the publication of his translation of Onze rêves de suie (Eleven Sooty Dreams) by Manuela Draeger. He is also an amateur teuthologist.

J. T. Mahany: The Albertine Prize is now the latest in a long parade of accolades that Disoriental has obtained. What is it about Djavadi's book you feel that has drawn so much acclaim (both in its original French and your translation)?

Tina Kover: I think there are several factors. Of course the writing itself is exquisite, and Négar Djavadi is a brilliant storyteller with a rare ability to make each reader feel as if she’s speaking directly to them. The book also touches on a number of issues that are of the utmost timeliness at the present moment: immigration (and refugee emigration), bigotry, sexual identity, acceptance. There is something in Disoriental for everyone; some intimate moment or observation that feels deeply personal no matter what you might be struggling with. This is a book that reaches across many lines and crosses multiple boundaries and I think that’s why people respond to it in any language.

J. T. Mahany: What was the process of translating the book like? Did you collaborate with Djavadi at all on the text? Did it differ much from the way you have translated the rest of your (rather prodigious, I may add) bibliography?

Tina Kover The process in itself was pretty much my standard one; I never read a book before I begin translating it and so I’m discovering the characters and the plot as both a reader and a translator, which, for me, at least, I think is key to retaining freshness and spontaneity in the finished work. Likewise, it’s not my general practice to communicate with authors during the translation process. They’ve created the original text in the solitude of their own minds and I prefer to do the same thing, though of course I welcome their input during the editing phase. I will say that from very early on I knew that Disoriental was something very special, the kind of novel that doesn’t come along very often, and I felt what I can only describe as a sort of reverence for its beauty as I got deeper into the story and realized what Négar was crafting and how ingeniously she was doing it.

J. T. Mahany: A review of Disorientalin in The Thread compares Djavadi's work to that of Elena Ferrante. Do you agree with this comparison?

Tina Kover: I’m certainly no expert on Ferrante, but I can see why people might make that comparison. I think Danny Caine said it very well in the review you mentioned: both Négar and Elena Ferrante are incredibly adept at creating brave and fully-realized female characters, and both are able to draw intimate portraits set within a context of broader-ranging social and political climates. I think it says a great deal for the wisdom of the editors at Europa Editions, who published both authors, that they saw how important these books could be and how much people would take them to their hearts.

J. T. Mahany: Disoriental concerns itself with a narrator who feels as though she is caught between two worlds, a theme which has appeared in the works of a number of authors writing in French, such as Dany Laferrière and Akira Mizubayashi. What is it about this type of narrative that you believe is appealing to readers?

Tina Kover: Most of us, if not all, feel caught between two worlds at some point in our lives, whether physically, emotionally, or culturally. As an expatriate myself there is a great deal in Disoriental that struck a personal chord with me even though my own experience of leaving one country and settling in another was different in almost every particular. But people might also feel like they inhabit a different “world” because of sexuality or race or disability or any number of things. At bottom I think that “caught” feeling is about alienation, about feeling like one doesn’t belong, and that’s something we can all identify with.

J. T. Mahany: How did you first get into translation?

Tina Kover: I actually self-published my first translation, George Sand’s The Black City, which was then taken on by a wonderful literary agent, Sandra Choron, and subsequently purchased by the now-defunct Carroll & Graf. Things progressed from there. I’ve been very fortunate to come into contact with a lot of incredible people in the publishing world and to have had the opportunities I’ve had, and I feel especially privileged to be a translator right now, when literary translation is receiving so much interest and attention, and when it’s more important than ever to keep the lines of communication open between cultures, to promote intercultural exchange and understanding when so many seem bent on their destruction.

J. T. Mahany: Do you have any upcoming projects about which you'd like to speak?

Tina Kover: I’m extremely excited about the upcoming release of my translation of Mahir Guven’s Older Brother, which will be out from Europa Editions on October 8, 2019. The book won the Goncourt Prize for a debut novel in 2018 and it’s another timely and extremely powerful depiction of life on modern society’s fringes, another story we all need to hear right now.